Are We Born Hardwired for War?

“Most honest combat vets will tell you, perhaps not eloquently but in their own way, the same thing: essentially that combat is in our human DNA and demands to be exercised... The question is, can we humans evolve peacefully, or will we succumb to instincts we can’t transcend?”

Too often, understanding human conflict has been conventionally addressed in a remedial, reactive way, at what we call the secondary level of “resolution” — through therapeutic or moralistic means, for example in the case of individual conflict, or through diplomatic or political intervention, as in the case of social conflict. Or we have addressed human conflict at the tertiary level of managing it, through judicial or military intervention.

These remedial, reactive approaches attempt to fix something that’s already happened. They do not address conflict at the primary prevention level, which involves understanding and avoiding the fundamental factors that create conflict because of how we have been conditioned to act. They are therefore ineffective because they do not prevent conflict from happening in the first place. If we prevent, we don’t have to fix.

The Foundation of Conflict

Realizing that what is necessary for the prevention of conflict at this level, one has to go beyond the surface of conditioned thinking to explore the foundation of the conflict created. This leads to the discovery that we humans are essentially hardwired for war, that we are, by design, rooted in the genetically programmed physical makeup of our brain, which gives rise to the fight-or-flight survival mechanism.

What triggers this biological hardwired automatic survival reaction is the instinctive fear of who and what we think is a threat to “our” survival. In the case of war it is the image of “the enemy,” that ethnocentric ideological nemesis –“them” – that is in competition with “us” for our survival.

The conditioned image of “the enemy” is solidly in place due to the constant reinforcement it has received over time. This image creates what you could call a biological self-defense blueprint, like a computer database, that over time has created an inborn or inherited pattern in the brain’s physical structure.  This pattern has been created in order for our brain to feel protected and to therefore ensure its survival. It acts automatically, on its own, without our consciously doing it. It acts like a robot, instinctively, to ensure its existence, so that we feel secure deep inside us. As a result, our brain is hardwired for war —we have inherited this tendency at birth for what we mistakenly believe will help us to survive. Our brain is a puppet that has someone else pulling the strings.

This pattern may have been helpful to humans in ancient times, but no longer serves us today.  Rather than guaranteeing our continued existence, it actually threatens it. 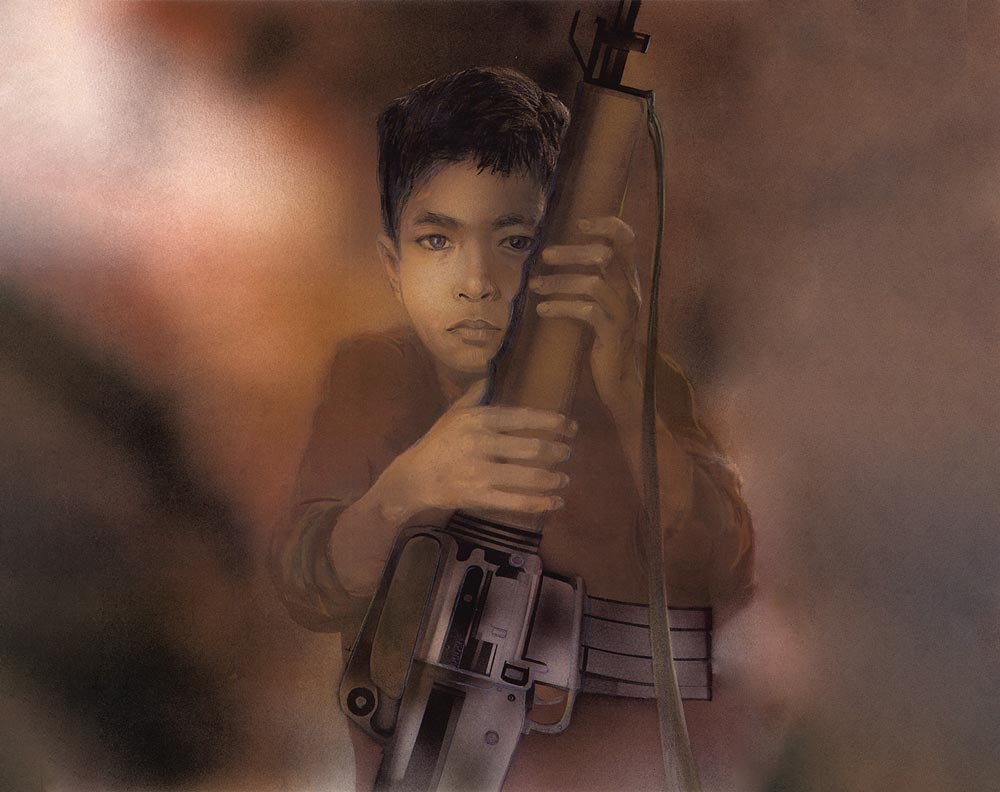 The information that has been put into our brain is like a software program full of information about the culture you live in, telling you what to do, how to act and who might be your so-called enemy. It is like a corrupt computer program that creates a deadly virus. It’s like a car program telling its driver where to go and doesn’t see that it’s heading off a cliff.

When confronted by a potential conflict due to what appears to be a threat, our primitive biological brain automatically prepares for combat.  Off we go, on the same road to war we’ve been on since time immemorial — inherited from generations of people before us.

That computer program keeps invading our brain because we are used to it being there even though it doesn’t work for our survival any longer. It is maladapted — not able to adjust to what is necessary. It’s corrupt. It doesn’t work. And being maladaptive it continues to activate inappropriately the old primitive brain to protect us when that old brain is not necessary. This happens because it cannot tell the difference between a real threat and a supposed one. It reacts to the image of a threat that the program has been designed to say is real.

Knowing this then, we can see that conflict created by this biological genetic program is no one’s fault – it is not a “personal moral shortcoming” – it’s not my fault or your fault – it’s the fault in the brain’s system, its malfunctioning primitive biological makeup, that isn’t working correctly.

The human brain operates defectively, operating on an archaic program driven to survive, while not being aware that it’s causing conflict.

Thinking it’s doing the right thing, this survival mechanism doesn’t understand that it’s not working to guarantee our survival any longer. It is a collective virus, for it affects the whole human race because we are all born with this “fault” in our brains. Being so, it is our responsibility to look at it, to pay attention to it as it arises in the moment and to not react out of it. If we can do this, then it has no place to go, and our collective survival becomes more reachable. 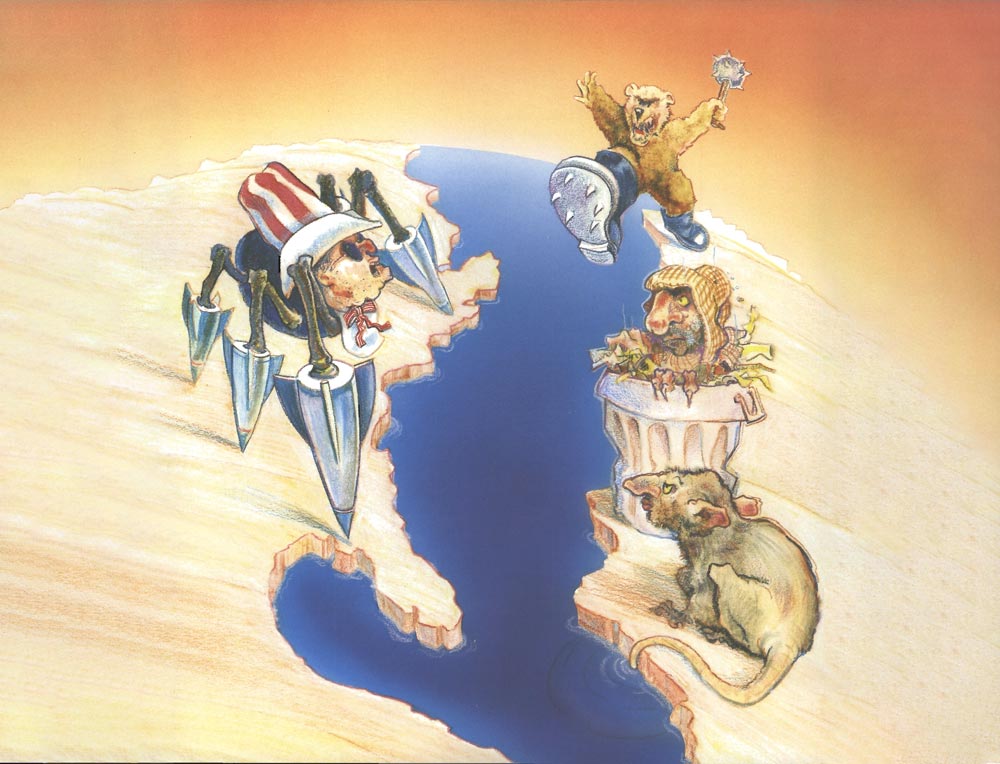 We Are the World

What is of upmost importance is to see that conflict created by conditioned thinking emanating from the biological brain is the same in all human beings. It is essentially the same in everyone since the human brain is basically structurally identical in all of us. It works alike for everyone. The content may be different in each one but the brain is anatomically equal in all human beings; thus what happens to me happens to us all. Self-understanding is understanding the whole human race, for we are the world and the world is us.

This fundamental maladaptive drive to survive has been going on since humans started their journey on planet Earth, trying to stay alive in a harsh and threatening world. Humans have always been at war with ourselves in this way, having biologically inherited a brain with an inborn hard drive that is driving the human race to its destruction. As an old saying goes, “We have met the enemy, and he is us.” Technologically and scientifically we have advanced at great lengths, but psychologically we are still in the cave of ignorance.

The essential question is: Can we bring insight to this maladaptive means of survival and therefore be free of this self- destructive genetic inheritance or “will we succumb to instincts we can’t transcend?”

What it takes to rectify this maladaptive process is the right education to look anew at the old program.  We need to see that it creates conflict by mistakenly trying to protect us from what seems to be a real threat to our survival when it is only an imagined one. In this fresh awareness, free of intellectual suppositions, one can see what is, without prejudice — without trying to correct or solve it.

Conflict is not a problem to be solved but a reality to be observed.

In this moment, it can end. This awareness is called “proprioceptive learning.” As opposed to knowledge, which is accumulative learning, the gathering and analysis of information to arrive at a certain intellectual conclusion — this is non-accumulated learning. Knowledge at this level has no place.  Proprioceptive learning is not an ideal, a solution, an answer in the conventional sense, to the “problem” of conflict. Proprioceptive learning is the state of noncumulative observation that sees the conditioned thinking as it is without judgment or trying to change it. In that moment of observation, it sees the danger of a conditioned thought and does not act on it.  This frees the mind of its habitual, conditioned, divisive state of reaction. 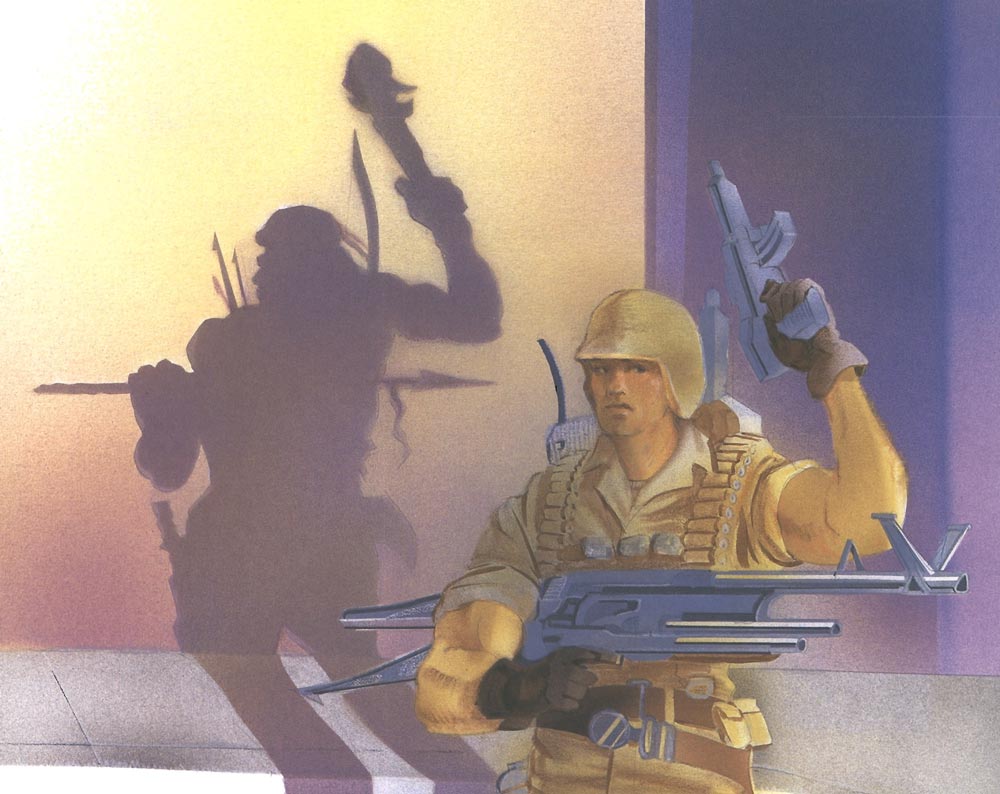 As Quantum Physicist Dr. David Bohm* once stated, “We could say that practically all the problems of the human race are due to the fact that thought is not proprioceptive. Thought is constantly creating problems and then trying to solve them. But as it tries to solve them, it gets worse because it doesn’t notice that it’s creating them, and the more it thinks, the more problems it creates – because it’s not proprioceptive of what it’s doing.”

“One gives close attention to all that is happening in conjunction with the actual activity of thought, which is the underlying source of the general disorder. One does this without choice, without criticism, without acceptance or rejection of what is going on. And all of this takes place along with reflections on the meaning of what one is learning about the activity of thought.”

*David Bohm was a Quantum Physicist who made significant contributions in the fields of theoretical physics, philosophy and neuropsychology. His books that reflect proprioceptive learning are Thought as a System, On Dialogue and Changing Consciousness.

Visit Our Hardwired for War Museum